skip to main | skip to sidebar

Above the clouds still shines the sun

We then decided it was time to sleep as we would have a lot to do the day after, starting with finding a way to leave that island.

In the morning, we gathered every piece of wood we could find, all the barrels and crates coming from the sunken ships that had been washed ashore, and we started assembling them into a raft.
Satisfied with our work, we had a bit of breakfast with apples and clear water we were lucky enough to find in the remnants of the wreck, and then we hopped on our homemade vessel to start our journey back to New Babbage. We had made up a paddle with a pole and a piece of plank and were taking turns to maneuver it.
Neither of us had a compass of course, so we agreed on finding our way through the position of the sun in the sky. It did go well for most of the day and we were progressing swiftly, but the sun disappeared behind a curtain of thick clouds on the way down from its zenith.
We waited for about half an hour, looking worryingly up, but the cloud layer was getting darker if anything. I put the paddle down and sat on a crate, letting the raft drift away, rocked by the waves.

- How will we find our way when the sky is that cloudy? I lamented.
Fly wrinkled his brow, glancing at me helplessly.
Suddenly, something fell onto my foot and I yelped in surprise.
- Flynn! I exclaimed, identifying the cause of that mischief.
I stretched down to pick my squirrel up with one hand, grabbing the stone he had pushed outside my small belt bag with the other hand.
- You're a naughty critter, I scolded him softly. That hurt you know!
- What is it? enquired Fly, eyeing the stone with interest.
- That was part of the cargo of the airship I sneaked on in Steelhead, I shrugged. I think it's called a sunstone, they got a lot of those over there.
- Show me? he asked, stepping closer to the crate I was sitting on and laying his hand in front of him, palm upwards.
I raised the stone up to his hand and suspended my move abruptly.
- Wha... started Fly.
- Wait! I interrupted him incisively.
I raised my hand higher to make sure that what I had a glimpse of was real and gasped :
- The sun!
- The sun? echoed the pirate boy, arching an eyebrow.
- The sun, I repeated with excitation, glancing at him. I can see it! Here, through the stone!
I handed over the polished piece of rock to him and watched, as he lifted it up against the cloudy sky, realization painting itself on his face.
- I wonder how it works, I asked myself aloud.
- Who cares! Fly whooped, starting a little dance. We can see the sun! We're saved!
I giggled at his dance though holding firmly the sides of the crate as the raft was swaying dangerously.

Thanks to the stone, we managed to follow the sun's course in the sky and stop sailing in circles. I could feel we were getting closer and closer.
I inhalated the invigorating marine air and thrilled at the subtle change in smell that was growing more and more sooty. The clear line where the sky meets the sea was beginning to blur and a grey cloudy smudge suddenly appeared, bristling with needles of steel and brass.

- New Babbage! I exclaimed, overcome by emotions at the sight of the familiar clocktowers and airships silhouettes standing out against the setting sun-tinted smog.
I started paddling faster, along the rythm of my heartbeats.
Finally, I was back. 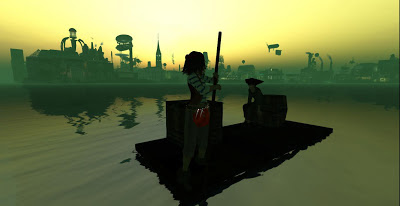 Myrtil Igaly
Red squirrel or 13 years old girl, sometimes half one, half the other (Risu), having fun in Second Life, hanging at Escapades or running around like Huckleberry Finn in Steelhead or Oliver Twist in New Babbage, going on adventures or building Messy things.

hey, visit those too !